Emerging of the Bombshell Within

An eclectic view of a girl's life

This holiday season, the bombshell was pretty bummed about not being able to afford gifts.  With all the chaos of relocating, I had not really given much thought on what I would be giving as presents.  By the time I was settled in, I found I couldn’t afford anything.  But, because it is a known fact that when any of the girly trio get together we begin plotting, the Stalker had a wonderful craft project she felt would make lovely accessories and wonderful presents at the same time.

I would normally have posted craft projects on my blog but these were meant to be presents and everyone knows that if they are presents, they should be a surprise.  So I had meant to show just this picture… 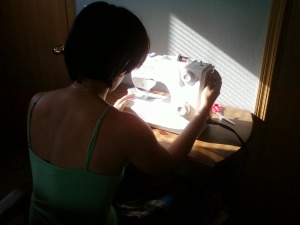 Of the Stalker hard at work

But then we got SO busy making presents!  Mr. Land even renamed us Itty & Bitty (me), the Evil Genius workshop elves.  So while we were both busy picking fabrics and yarn, cutting the materials and pinning it all together, as well as crocheting.. Itty also did all the sewing with the machine and Bitty was in charge of all the hand sewn final touches.   We didn’t count on having to make so many presents but we worked as fast as we could and all were mailed out before Christmas, although only about a third arrived in time for the actual day.

What did we end up making?

We made infinity scarves. This lovely patterned number was given to Luskca.

We crocheted regular scarves. This colorful scarf was sold to one of the Stalker's co-workers.

We even made crocheted infinity scarves. I made this beautiful turquoise number for my Mr. Land's momma as a gift from me. 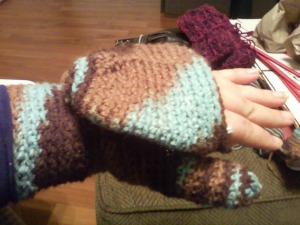 I learned how to crochet gloves. Some were fingerless, others had convertible mitten tops like these that I made for Luskca. 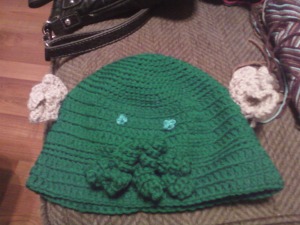 As an added chuckle, I made crocheted cthulhu toques from a pattern Luskca had found on a craft blog. She gets to have a family of cthulhus in Korea since I sent them all one.

Because of all this hard work, we will be selling some of our creations.  There were a couple sales over the holiday season and hopefully we will get a few more commissions from it.  I’m working on getting the site up and running to show other examples of our work plus all the options we have already made and ready for sale.

PS: The Cthulhu hats will not be for sale in Evil Genius accessories.  They were made as gifts for family and were definitely done to get some laughs.  All recipients were delighted with them.  If you wish to see the funny creator of the pattern I used or purchase a Cthulhu of your own, click here.